Pepperdine officials place the highest priority on the safety of our students, faculty, staff, and campus visitors and remain in close communication with National Parks Service biologists, who have studied mountain lion behavior in the Santa Monica Mountains for many years. University officials have requested the responding government agencies to relocate the mountain lions, but the request has thus far been denied. Government agents continue to assure University officials they see no elevated risk in the lion behavior we are experiencing. Nevertheless, it is very important that all members of the Pepperdine community remain vigilant and follow best practices. University officials will continue to monitor this matter, express our concerns to the agencies, and advise the community to remain alert to wildlife on campus.

Pepperdine officials will continue to share confirmed mountain lion sightings near the Malibu campus to ensure the University community is informed of, but not overly alarmed by, the wildlife with whom we share the Santa Monica Mountains.

Over the last few weeks, mountain lion sightings have been reported at the following locations (updates appear in green):

Confirmed sightings are those seen directly by University officials or with photo/video documentation.

As a reminder, if you encounter a mountain lion: 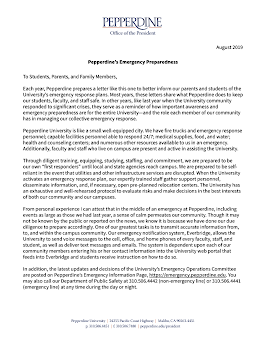